The Bio for Hustle Up Starlings: 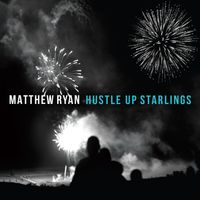 Matthew Ryan, Hustle Up Starlings
Due to be released May 12th, 2017

“On a dark lit night
In the throes of another fight
I heard a song, made me feel alright
Made me wanna explode into light...”
— Battle Born

Matthew Ryan is experiencing a kind of noisy renaissance. It began in 2014 with the release of Boxers, a fevered and smart rock ‘n’ roll record about the working class, produced by Kevin Salem. May 2017 will see the follow-through with Hustle Up Starlings, a heart-on-the-sleeve collection of silvery anthems that further illustrate Ryan’s reinvigorated love of language, noise and cinema.

Produced by Brian Fallon from The Gaslight Anthem, Starlings shimmers with an immediate and captivating focus. The 10-song set clocks in at 40 minutes with no prevarication or bluster, just a celebratory noise alight with hearts and history, broken-in voices and poetry.

Matthew Ryan grew up in Chester, Pennsylvania just south of Philly, and spent his teens in Newark, Delaware. In his early 20s, he moved to Nashville, where he was first signed to A&M Records, releasing May Day (1997) and East Autumn Grin (2000) before falling prey to the titanic label mergers of the early aughts.

What followed was more or less an album a year by any and all means possible until 2012’s In The Dusk of Everything. After moving to Western Pennsylvania in 2011, Ryan quietly decided that he’d had enough. Dusk would be his last album. “Music had become too lonely,” he said. But soon after that declaration, a sudden friendship with the frontman from The Gaslight Anthem, Brian Fallon, reignited something in Ryan. Fallon invited him out on some tour dates, and after performing a version of Ryan’s “I Can’t Steal You” (off of 2003’s Regret Over The Wires) together in New York City, the two decided they’d like to work together one day. Fallon just wanted to play guitar, but Ryan suspected he’d found a producer.

Hustle Up Starlings was recorded last summer in Nashville at Doug Lancio’s place on the East Side. Ryan assembled the cast because they all shared a common ethos and similar roots — The Clash, The Replacements, Bob Dylan, Bruce Springsteen, Leonard Cohen, The Cure, The Jam... Each of them hard working lovers of pop music with a black eye, a brain and soul.

Things were a little tense at the start. “Artists are like boxers,” Ryan says. “They have to test each other a little before they can trust each other.” And this was a roomful of artists. Brad Pemberton (Steve Earle, Ryan Adams) played drums and percussion; Brian Bequette (long-time blood brother and band member of Ryan’s) played bass; Fallon played electric and acoustic guitars while helming production; Doug Lancio engineered and mixed while adding synth and additional guitars. Ryan sang and played guitar as well. David Henry (former cellist for Cowboy Junkies) added strings where needed.

Fallon had a sense of the orchestration and arrangement already filed in his mind. They’d gather and play a song acoustically, discuss what they were hearing and what needed to happen, then Fallon would take the lead, check in with Ryan and off they’d go. Lancio would hustle around getting the mics and levels sorted then press record. They kept the takes that moved them, that felt alive. Most of the vocals you’ll hear were of the moment, as is the band’s performance. There was some minimal overdubbing, then Fallon would add backing vocals while the energy of just capturing a new recording was still in the room. Song after song played out like this. 7 days were booked, and they were finished in 5.

Hustle Up Starlings is an album in the truest sense of the word — it’s a cohesive sonic and narrative expression with a beginning, middle and end. It was in a conversation with the great producer and songwriter Joe Henry that Ryan realized once again the importance of committing to the fullness of experience that an album offers. “It’s an intimate story I’m telling here. These songs are personal, but if I’m lucky and I’ve done my job, they become universal. The story I’m living and writing about is happening in the context of this world we’re all observing and feeling right now, a world that feels like it might catch fire with all its uncertainty and friction, the ugly politics and rising impulses.”

Ryan explains further, “You see, this is what we do though, even when the world feels like it’s about to burn down, we keep leaning for tomorrow in our own lives and stories and families. It’s all hope and perseverance. We get up and we go to work. We believe in tomorrow, even when we’re not sure what tomorrow will be. Joe helped me to realize that I should probably tell the whole story as best I could. Brian and Doug and the band helped me bring it to life so it could be heard and shared. And hopefully felt.”

On Hustle Up Starlings, we find an artist who has shifted into some higher gear and come into full fruition. The entire collection is not only bolstered by a great band and their sonic immediacy, the songs are so generous with incisive couplets and soaring, searing choruses that repeated listens don’t dull its charm. Each song and performance in this collection leans on perseverance like a car leans into a hard curve — the thrill of “(I Just Died) Like An Aviator,” the inspired grit of “Battle Born,” the unguarded intimacies of “Maybe I’ll Disappear,” the jilted humor and meanness of “Bastard.”

There’s romance and doubt, there’s memory informing the phantoms of the future, there’s work and hope-tinged despair. There are moments that arrive and feel like instant classics. The title track, “Hustle Up Starlings,” comes in like an ambient Rolling Stones tune and unfolds in a filmic, breathtakingly honest way. Each detail glows as the story builds upon itself, cool and warm, incisive. The entire album works like this, each song into the next, moment after moment. It doesn’t let up.

The BIO for Boxers: 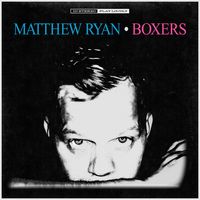 “BOXERS is many things—a protest, a rallying cry, a kind of Rust Belt film noir peopled with workers, bosses, lovers, and palookas—but it is first and foremost a rock and roll record.”

From the silvery burst of feedback that opens the record, to the dissolving vérité of the last notes of the final song, BOXERS is Matthew Ryan’s growling missive in the modern wilderness, a defiant howl against complacency, despair and greed.

Over a career that spans nearly two decades, the prolific Matthew Ryan has refined the raucous poetry of his songwriting, creating his own working class aesthetic where beauty and darkness often trade punches from line to line—Intelligent, minimalist, and unapologetic; it's music for humans. Along the way he has built a group of ardent fans and supporters including the American treasure that is Lucinda Williams and authors Joe Hill, Michael Koryta and Jim Shepard. His 1997 A&M Records debut, May Day, has become revered as a seminal alt-country record, with subsequent releases including East Autumn Grin, Vs The Silver State, In The Dusk of Everything and the notable “folk-tronica” (Michael Berick, allmusic.com) innovations on From a Late Night High Rise and Dear Lover cementing his place as a respected songwriter and performer.

Last winter, Ryan set up shop at Applehead Studios in Woodstock, New York with a small team: producer and multi-instrumentalist Kevin Salem, The Gaslight Anthem’s Brian Fallon on guitar, longtime Ryan collaborator Brian Bequette on bass, Joe Magistro (The Black Crowes, Rich Robinson) on drums, and Ryan himself on vocals and guitars. They hunkered down to do the work of making a loud, rattling rock album. Nearly everything was live to "tape," though Tracy Bonham later added violin to “Then She Threw Me Like a Hand Grenade."

“It was a beautiful brotherhood,” Ryan says. “In my mind, the record sounds like Crazy Horse meets early Replacements with nods to more recent bands I love like the National.” From the explosive force of the title track through the hollering gang vocals of “This One’s for You, Frankie,” to the woozy, heart-rending “Anthem for the Broken,” this is a record of big ideas and big sounds—massive blocks of distortion, machine gun drums, and lyrics like “All our heroes/Had no choice/Some busted chords/And a broken voice.”

BOXERS features the working poor in “Suffer No More,” the ruthless ethos of pure capitalists in “We Are Libertines,” and the two together in “Heaven’s Hill.” Ryan finds the humanity, scars and sneers and all, in each character. A native of Chester, PA, Ryan spent over a decade in Nashville before settling in a small town just outside Pittsburgh. All these locales are evident in his sound in their purest, finest senses—the gritty bluster of the rough side of a major metropolis, the literate but plainspoken lyrics honed in a town of songwriters, and the wintry, spacious, frustrated air of the cradle of American industry.

The sound of BOXERS is directly related to its content; a lyrically driven story exploring the collisions of hope and frustration. A story that speaks directly to the listener, armed with a resolute anger that somehow comforts, eliciting chills and fists in the air.